I came home from grocery shopping on a recent Friday night and changed into black shorts and a black T-shirt to relax for the evening. As a gag, I pulled an olive green, double-breasted blazer from the back of my closet, slipped it on and stepped into the living room; I then waited for my wife—who was seated on the couch with our three-year-old son—to look up and notice me. When she did, she howled with laughter and said, “No, no.” 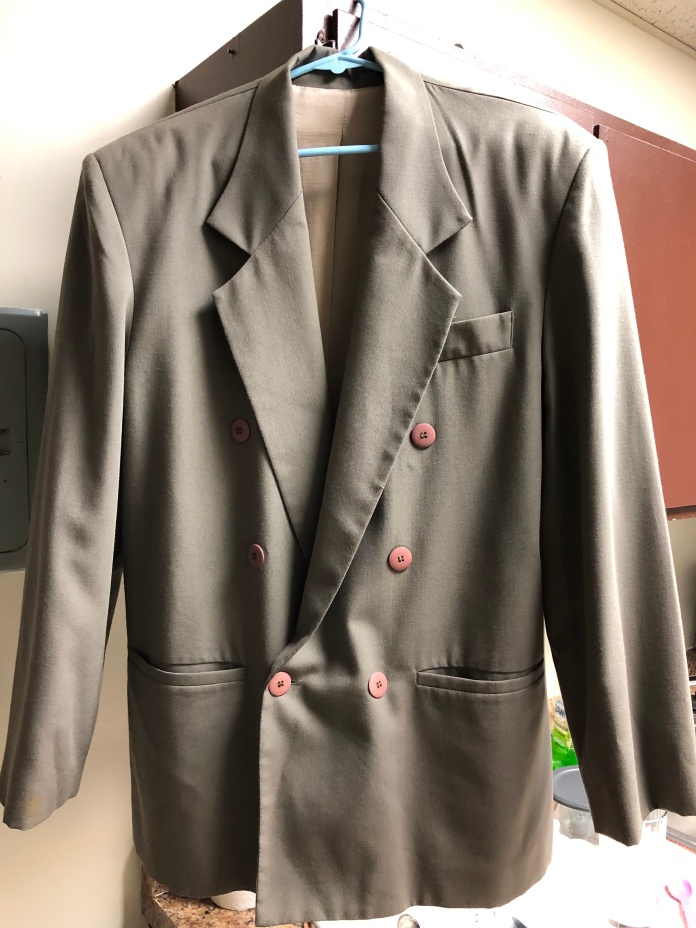 “It’s so out of style,” she said. The shoulder pads are so over the top.”

Of course, I knew she was right.

And one side note: I believe I am colorblind, so while I think the jacket is olive green, it may actually be beige or light brown.

The 1980s blazer is a cross between something Sonny Crockett would have worn on Miami Vice or one of the suit jackets David Byrne of The Talking Heads could have donned while performing on stage or appearing in an MTV video.

But even though the garment is dated, I thought I looked decent modeling it, since I’m actually leaner now than I was when I bought the jacket in the late 1980s at Sangertown Square mall in New Hartford, New York (if my memory is correct). It came with me to Washington, DC for graduate film school and then to my career stops in journalism—to Venice, Florida; Toledo, Ohio; and Phoenix, Arizona.

After returning to central New York in 2006, I left the jacket in my parents’ home in Rome, until I retrieved it a few years ago and buried it in my bedroom closet in Syracuse. I decided not to discard the blazer because I thought I would find the right occasion to wear it; but I never did, as I knew the jacket’s time had passed, as had mine.

But the story does not end there because the jacket has a history. After breaking it out and seeing it encircling my frame, it reminded me of the way I felt about myself in the late 1980s and early 1990s, when I was riddled with self-hatred over my chubby, underdeveloped and feminine appearance (caused in part by my hypopituitarism). No jacket back then would have made me feel good about myself when looking in the mirror.

I’d like to say I’ve moved past the low self-esteem that hounded me in my youth. But the truth is I still struggle with it daily. Professional success does not resolve it; neither does marriage nor being a decent parent. All of us must live with the non-Instagram versions of ourselves—the real, unvarnished truth we face every day—the wrapping of flesh that houses the spirit pulsating inside. And so the jacket is more than piece of clothing to me. It’s part of my past, a slice of my story I wanted to share.

I donated the blazer to the Salvation Army store, and I hope that despite its out-of-date style, someone else was able to get some use out of it.