Since I made the first collage piece in 2009, I have tried my hand a few more times, with varying results. I made two library-themed collage works called Archive and Checkout, seen here. 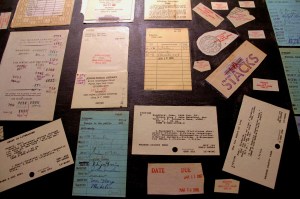 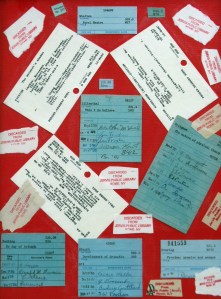 The idea for the pieces came to me because over the years my mother had purchased several used books from Jervis Public Library in Rome; most sold for one dollar or less. Flipping through some of the books, I noticed they were all stamped with the phrase “Discarded From Jervis Public Library” in red ink on one of the inside covers or pages.

Many of the books were in good condition, and some of the titles came from popular authors like James Patterson, Scott Turow, Anne Rice and Dick Francis. Even so, whether a title was a Harlequin romance or a prize-winning literary novel, I felt sadness because books that seemed to be still readable were being pulled from the stacks and deposited on cluttered shelves in a dark hallway of the library near the men’s and women’s bathrooms. I’m sure there’s a good reason why the books needed to be moved out of circulation, but on a visceral level I felt empathy for the discarded inanimate works.

As a result, I went to the library, bought several of the used books and cut out the stamped pages. I then gathered the pages and some old library cards that I found for sale online and pasted them together on two painted canvases.

This fun project in the summer of 2011 led to another unrelated work. My father had passed away in 2007 and I still had some of his old clothes and other personal items. So I thought I would try to make a collage tribute to him using materials left over from his life. Here is the finished product. 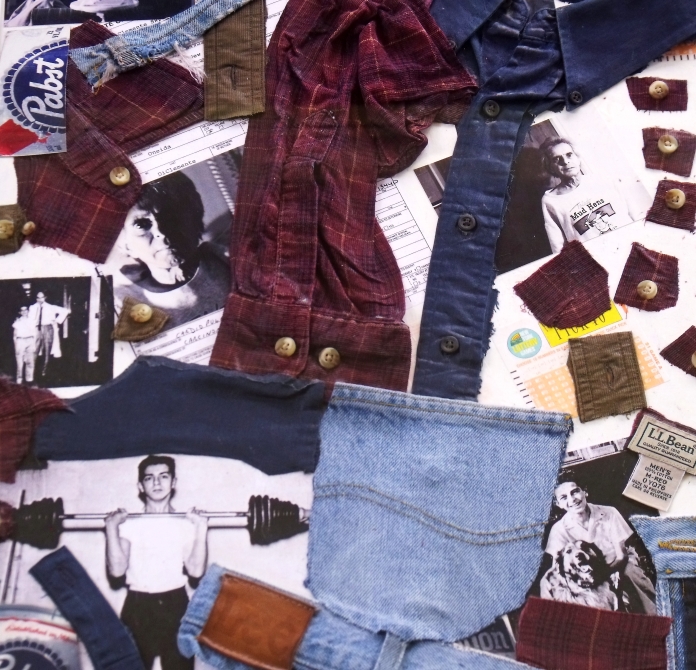 In hindsight, I should have painted the surface before I added the collage materials to give it some color. I also think I should have limited the number of buttons from my dad’s shirts.

Still, what I like most about these three collage works is I had no expectations when I started working on them. As stated in my last post, I am a collage novice, but an idea came to me and I said to myself, “OK, give it a try.”

And I think it’s a good lesson for me to learn, as artistic experimentation is vital to keeping work fresh. It helps to shake up the juices and allow new paths of creation to flow. This philosophy of taking risks and following your instincts applies to practitioners of all art forms and is also relevant in other areas of life, such as learning, career, dating, cooking and social experiences.

On a personal note, the three collages hold special meaning for me because they pay tribute to my late parents. I mentioned my father’s collage, but the two library-themed pictures also honor my mother, even if that was not the intention when I made them. My mom, who died last November after a long battle with cancer, was a bibliophile who researched and compiled detailed biographies and booklists for her favorite authors, including Danielle Steel and Nora Roberts. When I would mock her for taking a hobby to such a fanatical level, she would just say, “I’m very organized.”

She also gave me permission to rip out all of the “Discarded From Jervis Public Library” stamps from the used books she had finished reading. She piled the books in a wicker basket placed near the fireplace in the living room, with yellow Post-it notes on the covers indicating they had been “read.”

And I’m glad she had a chance to see the finished library collages since she contributed to the making of them. Right now all three collages are wrapped in brown paper and tucked under the bed in one of the spare bedrooms in my stepfather’s house in Rome. But if a day comes when I have some wall space in a future apartment—not the furnished studio I currently rent—I’ll hang up the collages and look upon the images with satisfaction, knowing a little bit of my parents’ spirit lives on underneath the glass frames. 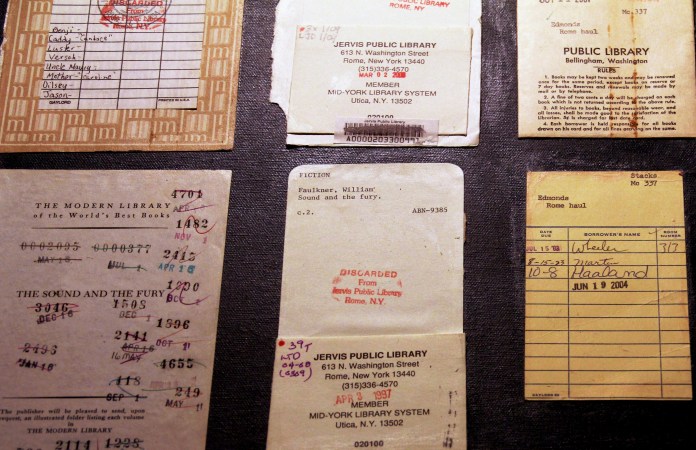