I spent last week in Rome, New York, as I recovered from Gamma Knife radiation treatment intended to eradicate leftover pituitary tumor cells. And I was once again overcome by the spectacular beauty of summer in my hometown.

Now that we have skipped past the Fourth of July, summer is ripe, bursting open in color, sounds and scents, but soon it will wane. Soon autumn will overtake it.

But now near perfection reigns in central New York with warm days, flowers in full bloom, vegetable gardens producing their bounty and children riding bikes and playing outside. We need rain here so it’s not quite perfect.

As I went for an evening walk heading toward Vogel Park in Rome, sunlight filtered through the lush maple trees lining North George Street, casting a greenish-yellow glow. Along the way I dodged hissing sprinkler streams dancing over burnt lawns and spilling over on the sidewalk. I saw teenage boys playing Frisbee in a front yard. A basketball bounced on a driveway and screen doors smacked against doorjambs. The smells of freshly-cut lawns and grilling meat entered my nose.

I also heard the voices of summer as I walked past the houses.

Summer is such an intense sensual experience words and images alone cannot do it justice. Ray Bradbury came as close as possible with his fictional Green Town.

I think these days of splendor in central New York are God’s way of making amends for all the lake-effect snow days of December, January, February and March when darkness comes at 4 p.m. and the cold air bites your face. But you can’t contain summer. You can’t bottle it up and preserve it like dandelion wine, store it in Mason jars and open it up on a February night when your bones ache and the snow melts inside your boots while you shovel the driveway.

Summer is also a nostalgic time, as we remember our youth spent at the playgrounds and baseball diamonds, doing cartwheels to show off for grandparents, running around the neighborhood with sparklers and chasing the ice cream truck down the street.

I also consider the math when looking at my life. How many more summers do I have left? And then I think only one, right now. That’s it.

While driving with my brother one afternoon last week I spotted a white banner stretching across Black River Boulevard. It announced the Drums Along the Mohawk drum and bugle corps competition would be coming on Aug. 2. “Oh no,” I said to my brother, “that means summer’s ending soon.”

The competition has always been one of the last big events of the summer in Rome, signaling cooler weather, moms checking off their school supply purchase lists and the Rome Free Academy football team practicing in two-a-day sessions. My stepfather also says Drums Along the Mohawk sometimes coincides with bats sneaking into the house and circling the kitchen or family room. 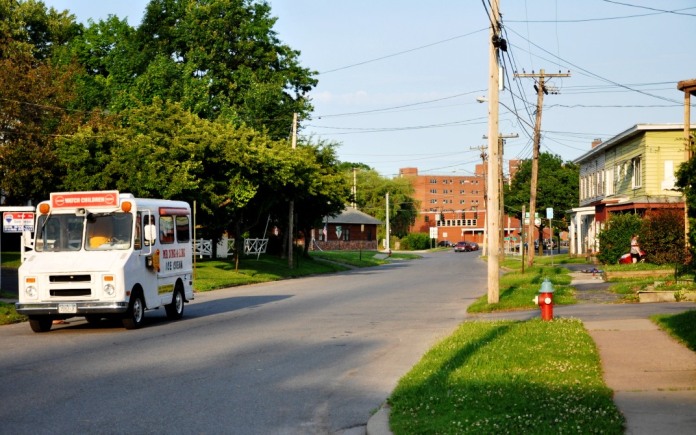 An ice cream truck is parked along Stanwix Street in Rome.

So before summer is gone again, make a point to leave the house, walk around the block and look at the stars, eat your share of ice cream cones, race to finish nine holes of golf in the gloaming, attend a minor league baseball game and go for a night drive in the country to hear the whoosh of the tires against the asphalt.

Summer is indeed fleeting, but we still have half a cup left to enjoy.