I’ve been lax with blogging lately, as I’ve been busy with video work and a couple of large-scale, long-term writing projects. But certain incidents in life make me stop and recognize the fragility of our existence, which, in turn, leads to deep rumination. And my ensuing thoughts, once processed, seem suited for this blogging space.

Something happened to me recently that disrupted my daily routine and forced me to pay attention to a person in peril.

While walking home from work Thursday night, heading down South Crouse Avenue between Harrison and Madison streets, I came across an African-American woman in her thirties sprawled out on the sidewalk in front of me, with her iPhone lying next her to body and a plastic Dunkin’ Donuts cup and ice cubes scattered nearby. 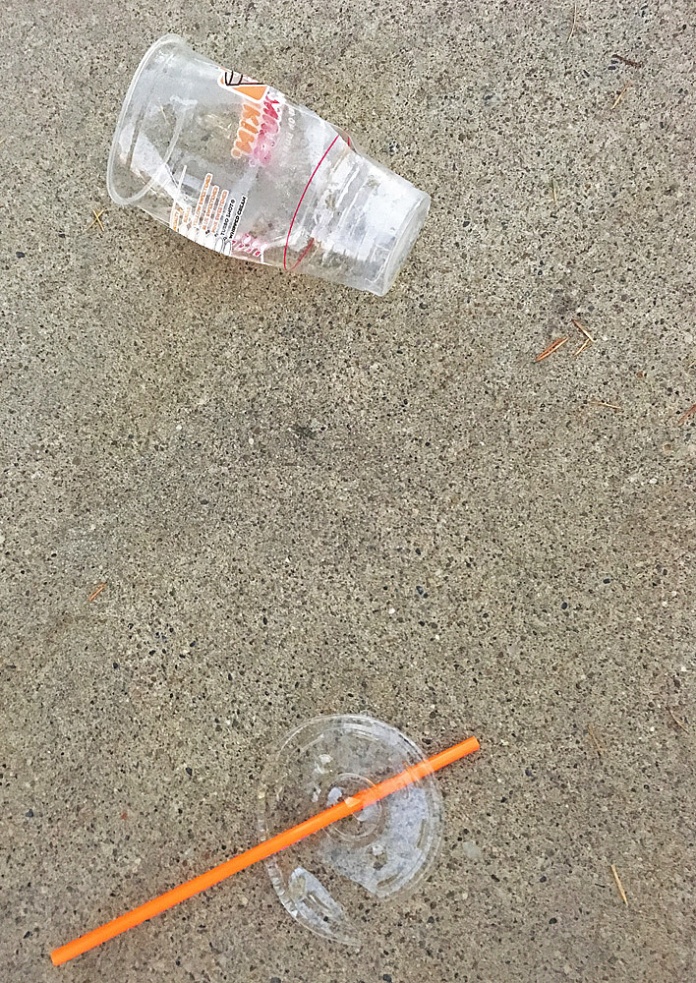 Dunkin’ Donuts cup and straw on the sidewalk (not staged or rearranged).

When I first noticed her figure in the distance, I thought it was a dummy or some type of debris, like a cardboard box. But her details sharpened as I approached her. She was dressed in a Dunkin’ Donuts uniform with a name tag that read “Natasha,” and she was positioned on her back, looking up at the darkening sky dotted with crows swooping overhead. Rush hour traffic sped along Harrison Street toward downtown and the onramp to I-81.

While it’s not usual to encounter people asking for money in the area surrounding Syracuse University, something about the woman told me she was not a panhandler or someone faking an illness to get attention. I surmised she had just finished her shift at Dunkin’ Donuts and was walking down the hill to catch a bus or continue on foot the rest of the way home. I bent over her body as I surveyed the scene. The woman’s glazed eyes stared back at me, and she appeared disoriented.

I said, “Mam are you OK? Did you fall? Are you hurt?” She was unable to respond with a complete sentence. “What?” she asked.

“Mam, why are you on the sidewalk?” She continued to hold a frightened expression on her face, but she did not say anything else. I said, “I’m gonna call someone for you.” I started to dial 911 as a man with a mustache and wearing a tan coat and an orange baseball cap walked across South Crouse Avenue toward us. “Are you calling an ambulance?” he asked as I pressed my cellphone to my ear so I could hear the operator above the traffic noise.

A female 911 operator took my call. “Nine-one-one, what’s your location?” she asked.

“South Crouse between Harrison and Madison.”

I relayed the details of my encounter with the woman on the sidewalk.

And the woman asked me a flurry of questions. “Does she appear injured? Is she breathing? Is she conscious? Is she intoxicated? Can you ask her her name and whether she has a medical condition?”

I did my best to get the answers the operator sought. The other man also tried to talk to Natasha. “Mam, what happened? Why are you on the sidewalk?” he asked.

Natasha could not vocalize any responses, and she just looked at us with her dark, glassy eyes. I don’t think she was aware of the situation or knew what had happened to her.

The man said he had to leave to “go to a founders dinner.” He crossed the street and I lost sight of his figure. The 911 operator said the ambulance was on the way, and a short time later, with sirens blaring, it pulled to the curb along Madison Street. Two young EMTs, one male and one female, hopped out of the ambulance and wheeled a gurney up South Crouse Avenue toward the woman.

And with that, I left. I said a Hail Mary for Natasha, praying the paramedics would get her to the hospital quickly and doctors would determine what was wrong with her.

A passing thought also tickled my brain. I thought it would be nice to work in some capacity where I could help people on a daily basis, as opposed to simply pursuing my own career goals of a higher salary and a more prestigious position.

I also felt proud of myself for interceding on Natasha’s behalf. I say this not because I consider myself a humanitarian or a Good Samaritan, but because the incident made me realize how vulnerable humans are and how easy it would have been for me to turn away from the figure on the sidewalk and walk by the woman, deciding not to get involved.

I believe we are only as capable as our bodies allow us to be. And as someone who suffers from hypopituitarism, hypokalemia (low potassium), diabetes insipidus and hyponatremia (low sodium), I decided to stop and render aid to Natasha because other people have helped me in the past when my potassium dropped or my sodium level plummeted to a dangerous mark, below 120 (normal range 133-145). I’ve passed out before and also became weak, dazed and disoriented. And people could have perceived that I was drunk or high on drugs. Instead they helped me and I got the medical treatment I needed. 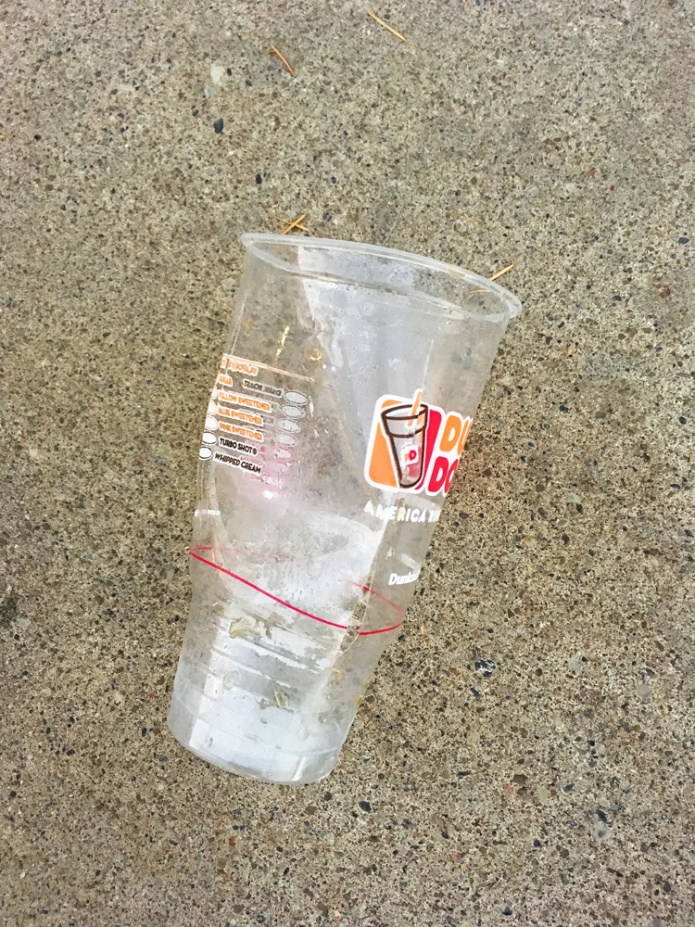 Dunkin’ Donuts cup on the sidewalk (not staged or rearranged).

The following morning I walked to work up South Crouse Avenue toward the SU campus. Natasha’s Dunkin’ Donuts cup was still lying on the sidewalk, and I hoped by now she had been given some intravenous fluids at Upstate or at another area hospital and was either resting comfortably in a hospital bed or had been discharged. I also hoped I would see her on her feet behind the counter the next time I stopped to get coffee at Dunkin’ Donuts.