Until recently, three telephone booths—with wooden frames, glass doors and their electronic “guts” removed—stood idle on the fifth floor of E.S. Bird Library at Syracuse University, appearing like obsolete artifacts from the past. 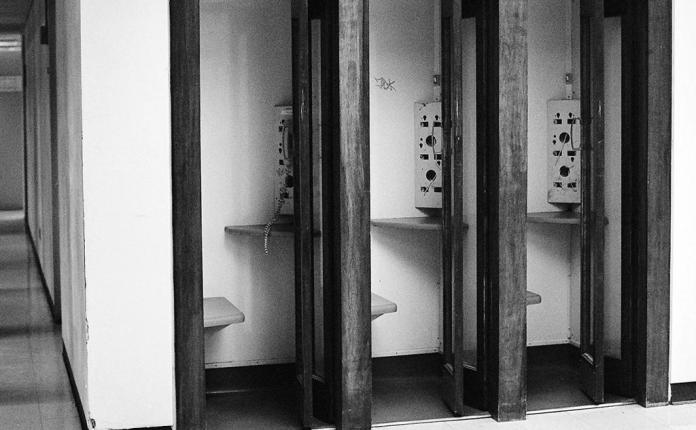 I spotted them a few years ago when I first started taking out books at Bird Library, after being hired as a staff member at SU. It’s one of the best perks, along with being able to work out for free at the university’s fitness centers.

I had noticed identical phone booths on other floors of the building, and they seemed out of place amid the countless volumes of books in a 21st Century university library. According to library officials, the phone booths were part of the original construction and were in place when the building opened in 1972. One booth on each floor was a campus phone and the others were pay phones. 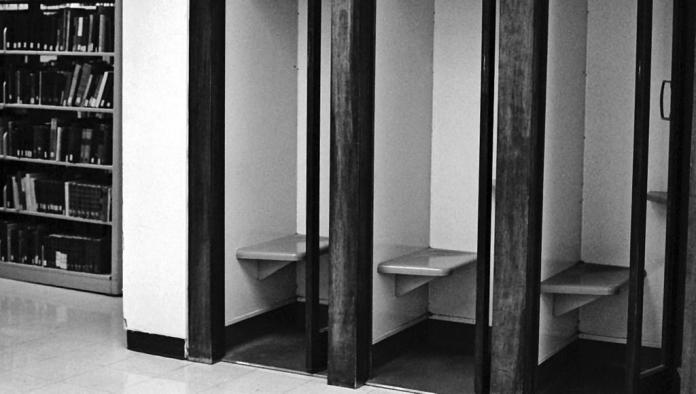 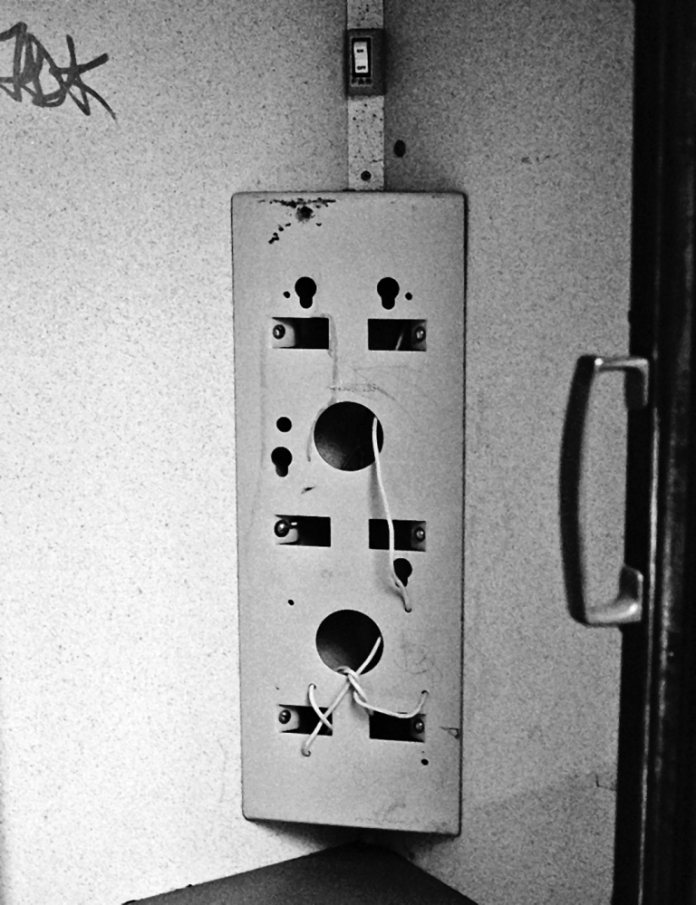 Close up of phone booth at Bird Library. Photo by Francis DiClemente.

But although they were installed in the early 1970s, the pay phones made me think of an earlier time period in cinema—from the 1940s to the 1960s.

The image of Cary Grant’s character (Roger Thornhill) using a pay phone in Grand Central Station to call his mother in Alfred Hitchcock’s North by Northwest (1959) jumped into my mind. Here’s the scene, courtesy of YouTube.

I also thought about scenes in film noir movies where a reporter would use a pay phone to call his editor to offer an update on a trial or a murder investigation.

One of the most dramatic phone booth scenes from the time period involves Burt Lancaster and Barbara Stanwyck in the 1948 movie Sorry, Wrong Number.

I’ve never seen the film, but it’s about a woman, Leona Stevenson (played by Stanwyck), who overhears a murder plot. Her husband, Henry, played by Lancaster, is talking to her on the phone, and the drama intensifies as the conversation unfolds. Here’s the scene.

Of course there are several other memorable cinematic phone booth scenes. I’m sure you’ll think of some. The obvious one is Clark Kent using a phone booth to “change into Superman.” Another is the gas station sequence in Hitchcock’s The Birds from 1963, with Tippi Hedren’s character seeking shelter in a glass phone booth as violent gulls attack.

A facilities coordinator for Syracuse University Libraries says all of the phone booths at Bird have now been dismantled and will be replaced by recycling stations.

Close up of phone booth at Bird Library. Photo by Francis DiClemente.

I’m a little disappointed that I will no longer see them when I visit Bird. I think it would have been fun to try to re-create a film noir-style scene using the library’s phone booths. I could imagine a cool “DOLLY IN” move to one of the booths as our protagonist slides the glass door shut, scrambles to find a coin and hurries to make a call—a call that could save his or her life.

I did, however, preserve my memory of the library phone booths, through a short poem I wrote that appeared in my 2010 poetry chapbook, Outskirts of Intimacy, published by Flutter Press.

Three phone booths stand
Idle and unnoticed on the fifth floor
Of Syracuse University’s Bird Library.
And in this repository of knowledge,
They present themselves
With sliding glass doors ajar
And phone units ripped out—
Relics from the pre-digital age,
No longer able to make or receive calls.