Busy with work and side creative projects, I haven’t had a chance to update this blog in a while. So here is a mishmash of entries from a scatterbrained blogger:

I snapped this photo of University United Methodist Church on my way home from work on Thursday evening. The way the late afternoon light hit the stone façade of the church commanded my attention. 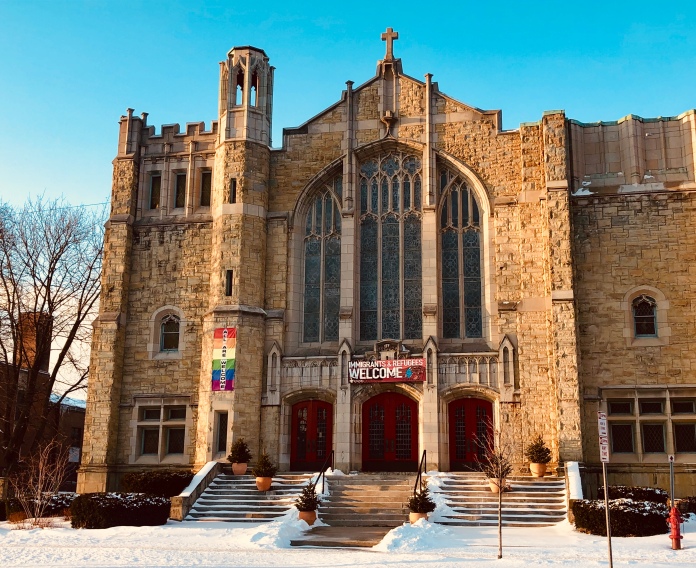 As I took the photo, with the cold air nipping my face and the evening traffic rushing along Genesee Street, I thought the image served as a reminder to me to not allow the hardness and difficulties of this world to form an impermeable barrier around my heart—to separate me from other people.

And looking at the tan exterior of the church, the scene hinted—at least to me—that Christian faith rests not with bricks and mortar, but rather upon trusting in God and loving others. And I think that’s a good message for the Lenten season.

Early in the week, Sunday night into Monday morning, I spent several hours in the Upstate ER due to a stomach virus; I spiked a fever above 103 and my sodium level dropped. Because I have hypopituitarism, I require a stress dose of cortisone when the flu and other short-term health crises strike, since my adrenal glands do not produce sufficient amounts of the hormone. So a nurse put in an IV, they gave me fluids and pushed a high dose of cortisone.

And sitting upright in the bed—since I was feeling nauseous (which was treated with Zofran)—I listened to a 99-year-old man on the other side of the curtain wailing in pain after breaking his hip. He told the nursing staff he lives in Pulaski, is widowed and has three children. He also possessed charm when engaging with the nurses on the floor, telling each of the women who rushed in to assist him, “I love you like a friend.”

And then after someone from the surgical team came to talk to him, he said, “I’m ready to go home to my heavenly father.” The surgeon was trying to find out from the man whether he wanted them to perform CPR if necessary. The older man never answered the question.

Later I heard him praying aloud, saying, “Please help that surgeon’s hands to be where they need to be. Guide his hands Lord.”

A few hours later, I was well enough to be released. And I realized, once again, the importance of gratitude, especially in terms of health. Every time I go to Upstate—whether to have blood drawn, to get an MRI or to be admitted for any reason—I am thankful for the essential functions of my body. I can breathe, see, hear and my brain works. I remain upright, capable of walking, and my fingers can type on this keyboard. It takes about ten minutes in an ER waiting room to make you realize how quickly your health can fail, how easy it seems for your life to be erased. Illness and accidents await us every day.

And a day later, lying in bed on the night before I would return to work, I felt stressed about the workload I would face. As I let out a few deep breaths, a line came to me that led to a short poem: “It’s only life.” And here is the finished product.

A thought to keep me calm
Amid the pressures of work:

It’s only life.
Why worry about it?
For in the end,
Despite your best effort,
You will die anyway.

I know this poem is trite and mawkish. I am guilty as charged. But the more and more I write—or should I say attempt to write, or better yet, attempt to write something worth of being published—I have come to a conclusion, one that mollifies me when I consider my lack of success in my literary pursuits.

And here it is: sometimes as a writer you do not choose the words, the story or the best means of expression; instead the words choose you as the only instrument capable of delivering them. So while I am not proud of the above poem, I am glad the three-word first sentence popped into my head and spurred me to put something on paper that did not exist before. That bad poem needed my voice to give it birth.