The following is a consumer service article I wrote as part of an online course I took over the summer. The course, Boot Camp for Journalists, was  provided by Mediabistro.

I am done with flimsy umbrellas. No longer will I fall victim to the allure of cheap models found at grocery, discount or drug stores.

I’m on a quest to find an umbrella that can withstand wind pressure and provide superior protection from the rain. I am also willing to spend a little more money to buy one that will last.

I am sure you can you relate to this experience, and I have repeated this scenario multiple times over the last few years:

You are walking on the street in the rain and you retrieve your compact umbrella from the pocket of your coat or pull it out of your book bag (or purse for women). You open it up and within seconds a gust of wind catches your umbrella and turns it inside out. You try to fix it, but the flaps won’t snap back to their original shape. You may even scrape your knuckles in the struggle with the metal frame.

There’s nothing left to do but toss the umbrella in the next garbage can you pass. Your clothes are soaked and you pledge never to buy another cheap umbrella again.

Here are four suggested models from companies that offer limited warranties and claim their products can resist wind.

Named the most durable model between $5 and $99 by the Good Housekeeping Research Institute (April 2013), the Samsonite Windguard Auto Open/Close Umbrella scored high marks for its broad canopy, water resistance, comfortable handle and an automatic open/close function. The GHRI also noted the fabric was attached securely to the spokes of the frame.

The Windguard Auto Open/Close is made with a Teflon-coated polyester canopy and is about 12 inches long when folded.

The Windjammer has an ergonomic rubber handle and steel shaft and ribs, and ShedRain claims the vented, 43-inch arc canopy is engineered to resist wind.

It opens and closes automatically and folds down to 12-and-a-half inches long.

The Windjammer fared well in the GHRI’s inversion force tests and received praise for its water resistance and quick-drying fabric. Another benefit for users: the umbrella has a low number of “pinch points,” reducing the chances of fingers getting caught in the frame.

Another ShedRain model was rated highly by Good Housekeeping. ShedRain says its WindPro Vented Auto Open & Close Compact is aerodynamically engineered to allow the wind to flow through the canopy—thus reducing the chances of inversion (not to mention frustration).

The WindPro closes to less than a foot in size and comes with a fiberglass frame and ribs and a cushioned handle.

ShedRain is a third-generation, family-owned company based in Portland, Oregon. It began making umbrellas and raingear in 1947 and stands by its products with a full lifetime warranty. If an umbrella fails due to a defect, ShedRain will repair it or replace it with a similar model.

According to Farmingdale, New York, manufacturer Innoventions Enterprises, Ltd., the GustBuster’s patented wind-release vents and flow-through design can withstand winds of more than 55 miles per hour, as tested by Vaughn College of Aeronautics and Technology. 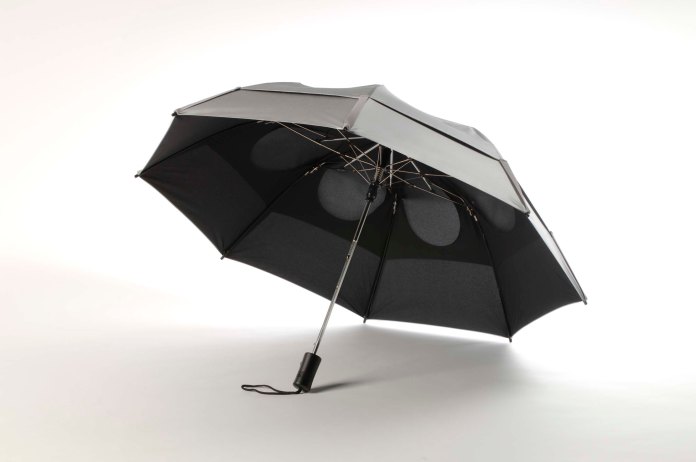 Steve Asman, president of Innoventions, says, “Our claim is simple. We make an un-flippable unflappable and un-leakable umbrella … and it comes with a limited lifetime warranty.”

Some of the features of the GustBuster Metro include a 43-inch, double-canopy design, a pinchless open and close release system, steel joint connectors and a reinforced shaft.

Consumer Reports put the model to the test by attaching an open GustBuster umbrella to a car and driving at high speeds. In its November 2013 issue, the magazine reported the GustBuster inverted at 30 miles per hour but did not break, even at speeds above 50 mph.

Asman says consumers have responded to the quality of GustBuster products. “We are selling out faster than we can make them right now.” He says Innoventions is preparing to open another factory, its fourth, to handle the demand.