Disclaimer: The following is my interpretation of what the doctors told me recently. The medical information may not be 100-percent accurate. I wanted to get the details down primarily for my benefit, as a log of my symptoms, hospital visits and treatment plan.

This month marks 35 years since surgeons at Upstate University Hospital in Syracuse extracted a tumor that had been growing on my pituitary gland. 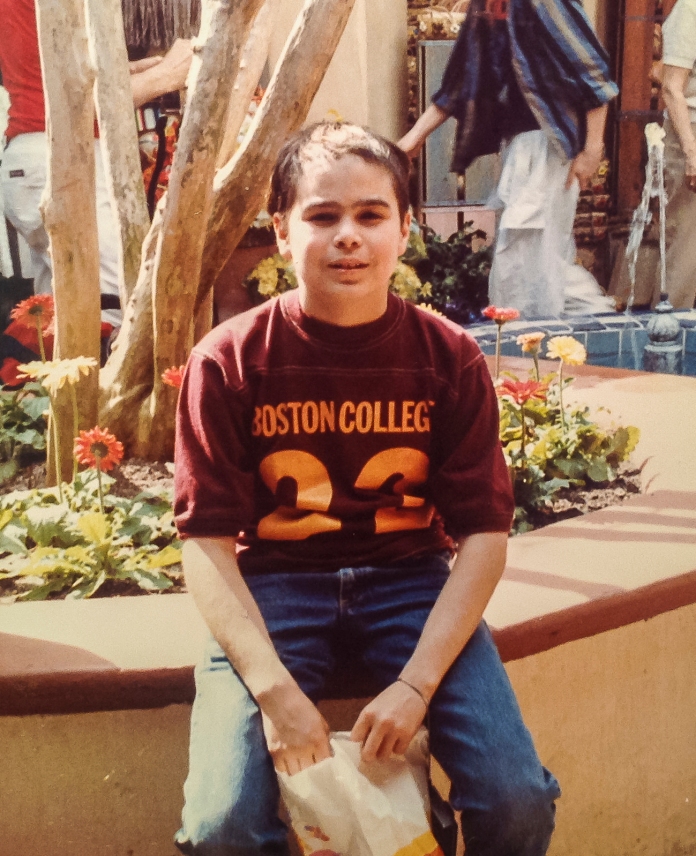 At Disney World in the winter of 1985; the scar from my Dec. 1984 surgery is visible and my hair has not grown completely back.

Subsequent surgeries to remove regrowth followed in 1988 and 2011, along with Gamma Knife radiosurgery in 2012 as a preventative measure.

Two for the Price of One

I had planned to write my annual post, expressing gratitude that I remain tumor free, but it appears a residual craniopharyngioma is now affecting my vision. I started experiencing double vision a few weeks ago, mainly when looking at someone or something from the front—at a distance of a few feet—or at a 45-degree angle. I noticed the faces of my colleagues would separate when I glanced at them across our cubicles. Also of note: I see fine with a hand over either eye. The double vision comes when I look at things with both of my eyes. 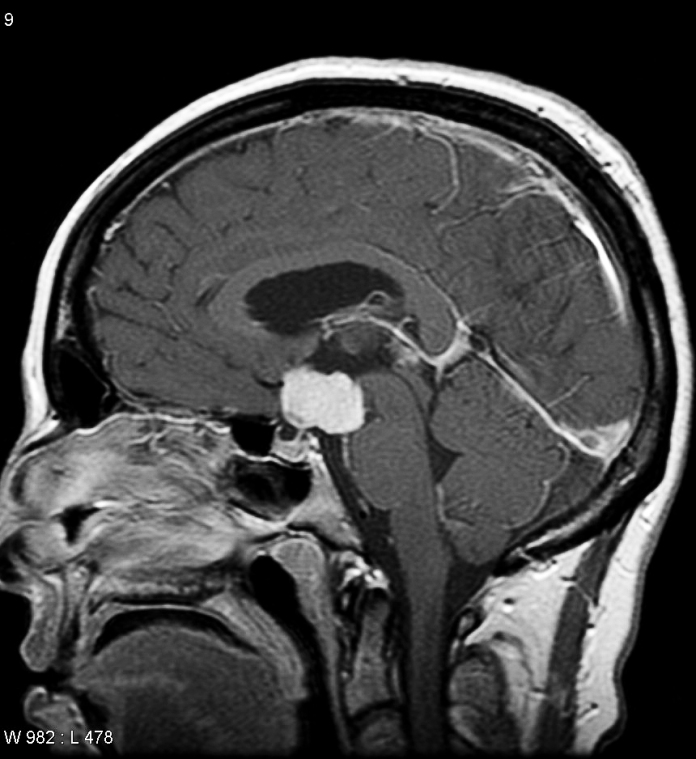 I went to see my eye doctor prior to Thanksgiving; after a series of tests, he stated my eyes seem to be crossing, whereas previously they had diverged slightly. I asked if the double vision could be caused by his new eyeglass prescription and he said, “No, it’s definitely something neurological.” He contacted my neurosurgeon, who scheduled me for an MRI.

The MRI was performed with and without contrast on Dec. 4, and I saw the neurosurgeon later in the day. When Dr. W. came into the exam room, chewing gum and wearing brown tortoise shell glasses, he said, “OK, so we have some good news. The scan is beautiful, very clear. There’s very little change from the one in September, nothing pressing on the optic nerve. But we have to find out what’s causing the double vision.”

He said he believes scar tissue in the sella turcica, a saddle-shaped cavity at the base of the brain where the pituitary gland rests, is affecting the cranial nerves and causing the double vision.

He said surgery may not help and could exacerbate the problem or damage healthy nerves and blood vessels in the region. He recommended an appointment with Dr. M., the radiation oncologist who teamed up with Dr. W. for the Gamma Knife procedure in 2012.

He also offered some positive news—he mentioned my eye doctor could prescribe prism lenses, an add-on to prescription glasses that can correct double vision. It doesn’t address the underlying problem, but it allows you to see normally.

I felt relieved because the MRI had not revealed a massive tumor pressing on the optic nerve or infiltrating another area of the brain. No insidious glioblastoma—giving me a death sentence within six to nine months. This was my old friend/foe visiting me again—a benign tumor, slow- growing but capable of causing problems, a health issue leading to concern but not panic.

At my next appointment on Dec. 13, the tall, thin figure of Dr. M. entered the room and I noticed his hair had become gray in the intervening years. He shook my hand and said, “We’ve made a lot of progress in seven years,” referring to more advanced procedures in radiation treatments.

He held up his right index finger and had me follow it. He asked if I was seeing double vision all the time and whether it was getting worse. “Are you seeing two of me now?” he asked. I said, “Yes,” and I used the wall bumper as an example. “If I look at that thing with both of my eyes, I see two. When I hold a hand over one eye, I see one.”

I told him the eye doctor had performed some tests, including a visual field test, which had showed defects in both the right and left sides.

Dr. M. told me the tumor was tube-like in appearance and near the cavernous sinus, impacting the cranial nerves that control the muscles of the eye.

He recommended five radiation treatments over the course of a week, as opposed to another round of Gamma Knife surgery. He ran through a series of figures—percentages about the efficacy of treatment compared to the risks. I had trouble following the complex information, but the basic idea is to give me the highest dose of radiation possible without causing any damage to healthy structures, e.g. blood vessels in the cavernous sinus. A safe but effective course of action.

He said I may experience some fatigue, but I can return to work every day after the treatments, which should only last about a half hour.

He also made a disheartening statement. “There’s no guarantee the radiation will correct the double vision. But if we don’t do anything, the craniopharyngioma will keep growing.”

Strapping on the Goalie Mask

On Monday, Dec. 16, I received a call at work from Upstate to come in do a radiation map of my brain. When I arrived at the Upstate Cancer Center in the afternoon, the waiting room was packed with patients sitting in the large, comfy faux leather white chairs; one irate man complained he had been waiting longer than an hour past his appointment time. He dropped some profanity and his blonde-haired wife tried to calm him down, to no avail. “This is fucking ridiculous,” he said.

A female radiation doctor called me and brought me to an exam room. She had me sign the treatment consent form and asked if I had any questions. I inquired about side effects. She said the main side effect is fatigue; patients can also experience headaches and some hair loss. She added, “Think of it more like surgery than chemotherapy.”

Then a male tech with dark hair ushered me into a large room with the CT machine. A number of nurses and techs scurried about. They asked me to remove my sweater and dress shirt, leaving me with just my white undershirt and khakis. They had me lie down on the table as they positioned a few different head rests. Once they had the right one in place, they applied to my face what felt like a wet, tight-fitting mask—with the consistency of rubber or papier-mâché. The mask had numerous holes in it, but it was still hard to breathe.

The test itself took very little time; I remained still while the machine moved my body in and out of the tube. When it was done, they pulled me out and the male tech held up the mask so I could see it. I thought it looked like a goalie mask and I asked if could snap a picture with my phone.

Since the double vision began, I’ve had Lou Gramm’s voice playing over and over in my head, with the words from the 1978 Foreigner song titled “Double Vision”:

An interesting side note: Gramm was diagnosed with a craniopharyngioma in the late 1990s; the tumor caused headaches and memory problems, and Gramm underwent surgery to have it removed. The story is included in Gramm’s autobiography, Juke Box Hero: My Five Decades in Rock ‘N’ Roll, co-written by Rome, New York native Scott Pitoniak.

In conclusion, I present a breakdown of my current health situation.

The tumor has regrown.

It is causing double vision

The radiation treatments may not fix the problem.

No glioblastoma or other malignant tumor is swelling inside my head.

I don’t have an aneurysm and I did not suffer a stroke.

The craniopharyngioma is not pressing against the optic nerve.

Prism glasses can be prescribed to correct the double vision.

And so gratitude hits me again, as I feel lucky every time I step inside Upstate University Hospital, thankful that my heart beats and I can breathe, walk, talk, see and hear. Not everyone inside Upstate can say the same thing.